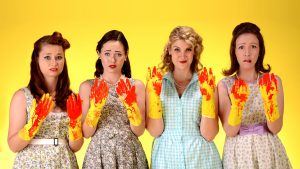 The Life and Death of John the Milkman

In the summer of 1959, in a little suburban town, in a very ordinary kitchen, four “regular” housewives find themselves in a very irregular situation, but how hard can it be to dispose of a dead body? This dark comedy follows the lives of four women trapped within the constraints of social expectations. How relatable can relationships from 1959 be to ones today? Perhaps more than you may expect. This is a story about four women who are ready to claim their rights, their identities, and their own independence, at any cost.

SEPT 27th, 2017 in NORTH BAY at the Widdifield Theatre

OCT 12th-14th, 2017 in UXBRIDGE at the Uxbridge Music Hall (A part of Celebration of the Arts)

SEPTEMBER 7th and 8th, 2018 in COBALT at the Cobalt Classic Theatre

“The Life and Death of John the Milkman was one of the best shows I have seen in a long time and I go to a lot of shows. The story line had me at “hello” and the playwright’s talent for capturing the best from his actors far exceeded any other community plays I have seen. The marquee value of this show is second to none and although the playwright chooses to live in North Bay, his name is synonymous with the best this province can call its honoured son.“

“In The Life and Death of John the Milkman Joshua Bainbridge perfectly captures the soul-deadening ennui of 1950s-era tract-home suburbia as he follows the misadventures of four beautiful, bored housewives whose penchant for revenge literally results in a bloody mess. The chemistry of the cast members is magic; never has murder been so much fun!”

The Proscenium Club would like to thank the Ontario Arts Council for the ongoing support.

Our province would not be the same without you.

Background: Proscenium Club has been active in the Northern theatre scene for the past few years working in various capacities. After formalizing in 2016, Proscenium Club conducted their first project I Live with Him Every Day, which presented at 3 different venues in rural areas of Ontario as a pilot to establish interest in future tours. Director Joshua Bainbridge, who founded Proscenium Club, has been writing and producing his own works since 2010 after graduating from Canadore College’s Theatre Arts program. Seeing a shortage of new theatrical works emerging from Northern Ontario, he brought together several passionate like-minded artists to form a self-sufficient professional theatre company to create and produce new Canadian works. The Life and Death of John the Milkman was the first formalized tour by this emerging theatre troupe.