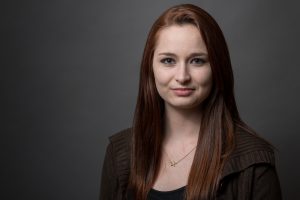 Stephanie Kast, originally from Dorchester ON, moved to North Bay to pursue a career in the arts graduating from Canadore College’s Theatre arts program. Steph has appeared as Prissy Andrews in Anne of Green Gables, Mrs. Lovett in Sweeny Todd: The String of Pearls, and A Bride of Dracula in Joshua Bainbridge’s adaptation of the classic novel. Steph played the role of Alex in both the Canadore College production of I Live with Him Every Day: The Tragedy of David and Dave then re-praised the role in the shows professional premier, which toured in Fall of 2016.  In winter 2017, Steph appeared as Balthazar in the Watershed Shakespeare Festival Collective production of Romeo and Juliet. She directed the world premier of her original script The Bonds That Hold Us for the On The Edge Fringe in 2017. She also appeared as Lady Macbeth in Macbeth. Winner of two Best in Fringe Awards; Jurors’ Choice and Audience Choice. Stephanie appears in the feature film Pride, Prejudice and Mistletoe, and the TV Series New Eden.

In the Proscenium Club’s 2017/2018 tour Steph appeared as Joan Marshall in The Life and Death of John the Milkman. At the 2018, On the Edge Fringe Festival, she directed One Man, All Woman, as well as the her original work, The Cavewoman. Stephanie played Mercy Lewis in the Sun Dog theatre festival production of The Crucible. She then played Beth in The Proscenium’s 2018/2019 tour of Sit, James. At On the Edge Fringe 2019 Stephanie wrote and directed Artemisia, which went on to win Best of Fringe: Best Original Work. Steph appeared as aspiring actor, Teresa in the Club’s 2019/2020 touring production, Barefoot on the Moon.

Steph will appear in the 2021/2022 touring production of Happy Jack’s Motel.

As a textile artist Steph focuses on making wearable art pieces that challenge convention and inspire imagination. Her work provokes thought while functioning as utility clothing or fashion depending on the environment she is giving response to.