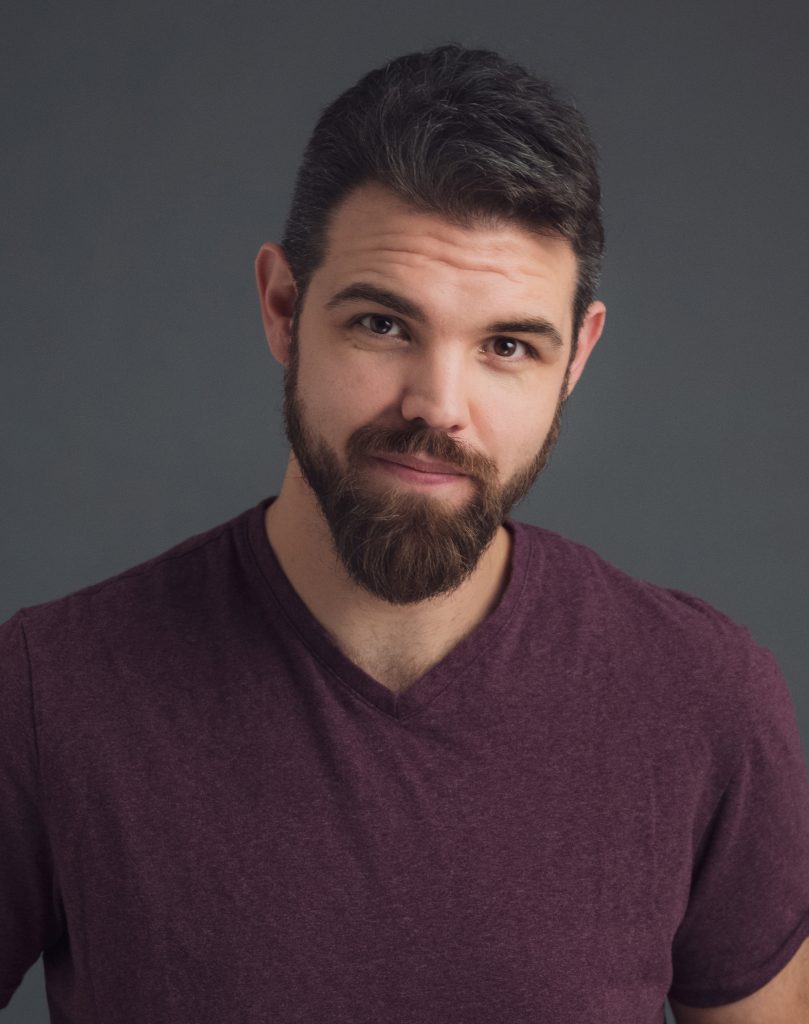 Joshua Bainbridge is the Artistic Director of The Proscenium Club, an actor, writer, director living in North Bay and a Graduate of Canadore Colleges Theatre Arts Program.  He founded the theatre company J2 Productions in 2009, adapting Reservoir Dogs into a stage show and starring as Mr. White. Josh has written and directed a number of original and adapted works including I Hear You Ride Horses, People Grieving, The Three Musketeers Trilogy (appearing as Athos in all three parts), Robin Hood: King of the Outlaws (Little John), The Life and Death of John the Milkman, Sit,James, Paper Dolls and Poison Ground, Barefoot on the Moon, and I Live with Him Every Day: The Tragedy of David and Dave. Other notable roles include Edmund in the Watershed Shakespeare Festival Collective (WSFC) production of King Lear. Ben in The Night of the Living Dead, Hank in Marvin’s Room, Richard in You Are Here and as  Mercutio in the WSFC production of Romeo and Juliet. In March of 2019 Joshua starred as John Procter in the Sun Dog theatre festival production of The Crucible.

In winter 2013 Josh’s production of David Mamet’s Glengarry Glen Ross won him the honor of Best Director at the 2014 QUONTA festival as well as winning Best Production. In summer of 2017, Josh adapted, directed and played the titular character in Macbeth at The On The Edge Fringe Festival. Winner of two Best in Fringe Awards; Jurors’ Choice and Audience Choice.

In film and television Josh has appeared in numerous projects including; Harold and Lorna, A Dark Truth, Mums the Word, Joseph and Mary, Country Crush, Too Close For Christmas and the Netflix original The New Romantic as well as the television series Dark Rising: Warrior of the Worlds. The USA/NBC series Eyewitness, Letter Kenny, Cardinal, What Would Sal Do? on HBO Canada, Hard Rock Medical, the true crime Series Bad Blood on Netflix, When Hope Calls and New Eden. Josh will also appear in the upcoming films All My Puny Sorrows, Kicking Blood and Astonishing Tales of Terror.  Joshua also works as a northern OSLO ACTRA representative.

Joshua is the writer and director of Proscenium Club’s most recent show, Happy Jack’s Motel, in which he also appears as Jack.

Josh also engages the arts as a visual and multi-artist working with groups such as Aanmitaagzi, Future in Safe Hands Collective and on the contemporary art festival Ice Follies. Josh’s media arts installation practice focuses on dystopian futures that are not far from our reality. “People need dramatic examples to shake them out of apathy and I can’t do that without making art.” His work engages in the macabre and often dark truths about the places that people do not want to acknowledge.