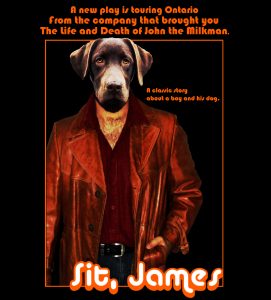 James is a lonely young man living with his brother in the rundown farmhouse left to them by their parents. Invading cult members, a romantic interest in his distant cousin and an invisible dog-man contribute to the growing tension between brothers strained by 15 years of secrecy, anger and shame.

Comedic and serious, light and introspective, Sit, James is an exploration of trust, family and mental illness.

“Bainbridge’s play is important. He is reminding us that what people present to the world is not the whole picture, and mental illness is a much deeper inner dialogue.”

STOUFFVILLE at 19 On the Park

PARRY SOUND at the Stockey Centre

NORTH BAY at the Widdifield Theatre

The Proscenium Club would like to thank the Ontario Arts Council for the ongoing support.

Our province would not be the same without you.

Background: Proscenium Club has been active in the Northern theatre scene for the past few years working in various capacities. After formalizing in 2016, Proscenium Club conducted their first project I Live with Him Every Day, which presented at 3 different venues in rural areas of Ontario as a pilot to establish interest in future tours. The Life and Death of John the Milkman was  he first formalized tour by this emerging theatre troupe and ran six venues over the 2017/2018 season. Director Joshua Bainbridge, who founded Proscenium Club, has been writing and producing his own works since 2010 after graduating from Canadore College’s Theatre Arts program. Seeing a shortage of new theatrical works emerging from Northern Ontario, he brought together several passionate like-minded artists to form a self-sufficient professional theatre company to create and produce new Canadian works.