I Live With Him Every Day: The Tragedy of David and Dave – 2016, Ontario Micro Tour

I Live With Him Every Day: The Tragedy of David and Dave – 2016, Ontario Micro Tour 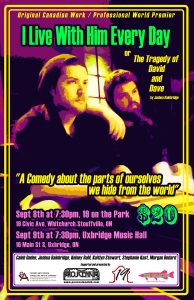 I Live With Him Every Day: The Tragedy of David and Dave

Written and directed by Joshua Bainbridge

I Live With Him Every Day explores the truth we are all afraid of realizing; that we might not be special. It examines the lives of five young people struggling to live in a world in which parents are absent and friends make desperate efforts to fill the gap. With a fresh, contemporary voice, this dark comedy is an edgy portrayal of youth lost and adrift in the big city.

Although this is the first play staged by the newly formed Proscenium Club, its members have been working in the Northern theatre scene for the past few years. Bainbridge, who founded the troupe just this summer, has been writing and producing his own works since 2010 after graduating from Canadore College’s Theatre Arts program. Seeing a shortage of new theatrical works emerging from Northern Ontario, he brought together several passionate like-minded artists to form a self-sufficient professional theatre company to create and produce new Canadian works.

This small tour was conducted in collaboration with the Future In Safe Hands (FISH) Collective (www.fishcollective.com), a cross-cultural multi-arts collective of Indigenous and non-Indigenous artists operating out of the North Bay area.

STOUFVILLE at 19 On the Park

UXBRIDGE at the Uxbridge Music Hall